This version of the CCD55 family of CCD Sensors is normally used as a full-frame imaging device although the image area is split into two sections (A and B) that can be clocked separately if required for frame transfer operation. The CCD55 has a single serial output register that has separate charge detection circuits incorporated at each end. One output (A1) is intended for high-speed applications and has an associated dummy output. The maximum speed of this output is approximately 12 MHz when driven into a 10 pF load. At this frequency the output is sufficiently settled for reliable CDS. Operation up to 20 MHz should be achievable if incomplete settling can be tolerated. This output has a charge handling capacity of at least two binned pixels. The second output (A2) is designed for the lowest noise performance whilst still being able to handle the full well capacity of one pixel (approximately 450,000 electrons).

The CCD55 is intended as an upgrade to the CCD05 and is mostly pin compatible with the CCD05. The main features that have been upgraded are the output amplifiers which are now significantly lower noise and higher speed, the pixel full well capacity has been significantly enhanced, a register dump drain has been added and the new design is now compatible with the standard backthinning process. 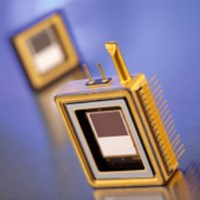 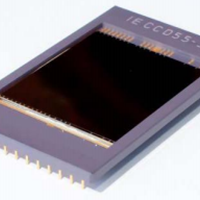