Thousand Oaks, California – February 19, 2021 – Teledyne Technologies (NYSE: TDY) is proud to contribute several of its advanced high performance image sensors to form part of the complex instrumentation onboard the Mars Rover Perseverance. Teledyne sensors will power, sense and help analyze the chemical composition of the surface during the Mars 2020 mission.

The Mars 2020 mission addresses high-priority scientific goals, including the search for signs of past microbial life and more importantly, answers to address the question of the potential for life on Mars. Providing opportunities to gather knowledge and demonstrate technologies that address the challenges of future human expeditions to Mars, the mission will include testing a method for producing oxygen from the Martian atmosphere, identifying other resources (subsurface water), improving landing techniques, and characterizing weather, dust, and other potential environmental conditions that could affect future astronauts living and working on Mars.

Teledyne provided CCD image sensors to drive both the SuperCam and Scanning Habitable Environments with Raman & Luminescence for Organics & Chemicals (SHERLOC); instruments that will search for organic compounds and minerals, determining if they have been altered by watery environments, and proving signs of past microbial life on the planet.

In addition, a Teledyne semiconductor foundry built the JPL-designed CCD image sensor that powers SkyCam, part of the Mars Environmental Dynamics Analyzer (MEDA), a meteorological suite for the Mars 2020 rover.

In addition, all of the electricity required to operate Perseverance is provided by a power system called a Multi-Mission Radioisotope Thermoelectric Generator (MMRTG) developed by Teledyne Energy Systems.

“We are proud to contribute to the discovery that will take place as a result of the Mars 2020 mission and pave the way for humans to one day visit Mars,” said Dr. Robert Mehrabian, Executive Chairman of Teledyne.

Teledyne has a long and proud tradition of enabling the exploration of Mars, including the 2012 Mars rover, Curiosity, where multiple companies, again, contributed both innovative and robust technology to a successful mission. Contributions included the MMRTG (also onboard Perseverance), high reliability relays, switches and RF modules and some of the image sensors in the navigation and hazard avoidance cameras. 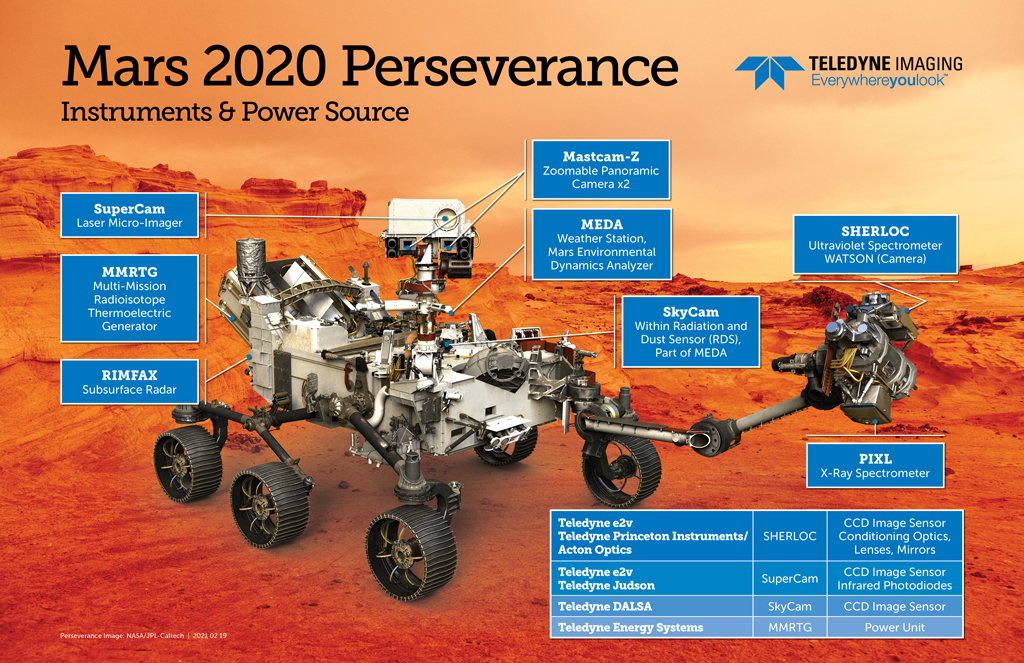