The Royal Swedish Academy of Sciences has awarded the 2019 Noble Prize in Physics to James Peebles (Princeton University, USA), Michel Mayor (University of Geneva, Switzerland), and Didier Queloz, (University of Geneva, Switzerland and University of Cambridge, UK) for contributions to our understanding of the evolution of the universe and the Earth’s place in the cosmos. Half of the prize is awarded to James Peebles for theoretical discoveries in physical cosmology, while the other half is shared jointly to Michel Mayor and Didier Queloz for the discovery of an exoplanet orbiting a solar-type star. Mayor and Queloz’ first discovery of an exoplanet orbiting a solar-type star in our Milky Way has fuelled a revolution in astronomy with the further discovery of more than 4000 exoplanets. At the heart of these discoveries is highly sensitive and advanced CCD imaging technology that continues to power both ground-based and space telescopes.

Dr. Giuseppe Borghi, Vice President of Business Development Space and Quantum at Teledyne e2v said, “Congratulations to the Nobel prize winners. Their revolutionary curiosity paves the way for future discoveries and endorses the importance of this work. We are pleased to play a role in exoplanet discovery, in particular with the development and manufacture of highly sensitive CCD image sensors for ground-based and space telescopes.”

Teledyne, through its UK based Teledyne e2v and US-based Teledyne Imaging Sensors enables the majority of large ground telescope projects globally, respectively in the visible and infrared wavelengths, such as LSST, VLT and ELT, which facilitate follow-up projects to spaceborne exoplanet-hunting telescopes. Teledyne’s notable CCD and infrared detector heritage in exoplanet-hunting spaceborne telescope missions also include CoRoT, WISE, Hubble and Kepler, where the latter revealed there are more planets than stars.

Dr. Paul Jorden, Chief Engineer – Astronomy at Teledyne e2v said, “The Kepler spacecraft vastly increased the number of known exoplanets through its large focal plane of Teledyne e2v sensors.  The Gaia satellite is also expected to detect thousands more.  Multiple ground-based state-of-the-art radial velocity spectrometers have been evolved from the original Nobel instrument. Many of these use Teledyne sensors to detect or confirm exoplanets including- Carmenes, HARPS, OGLE-IV, and others that are currently in construction.” 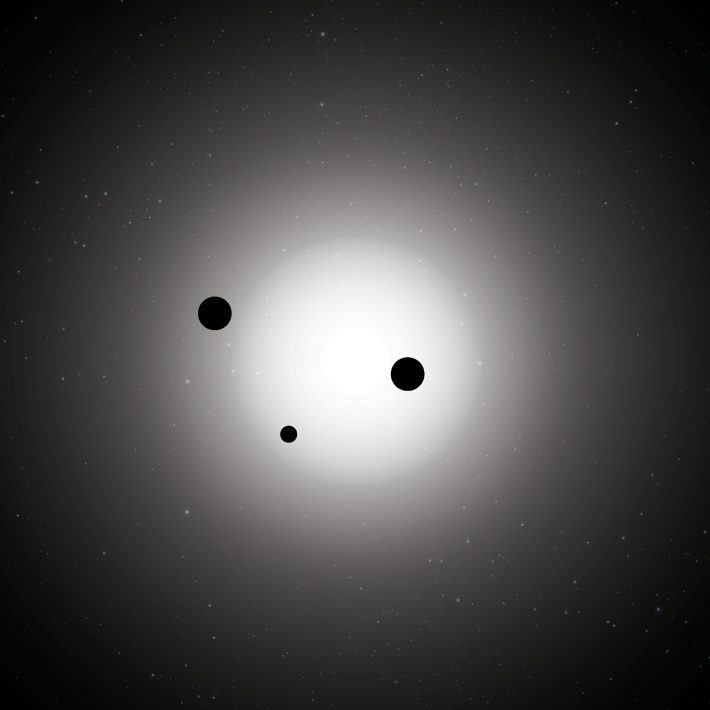 Artist’s impression showing three planets orbiting across the face of their host star. Image courtesy and copyright of ESA