50th Anniversary of the CCD

Teledyne e2v marks this anniversary with a series of publications and highlights how the future is bright for CCDs in space, science and other demanding applications.

CHELMSFORD, UK, January 28, 2020 — From October 2019 through to January 2020 marks the 50th anniversary of the CCD, a device that has transformed the understanding of physics, life sciences, the Earth, our solar system and beyond, and enriched our lives through digital photography.

Willard Boyle and George E. Smith invented the charge-coupled device (CCD) in 1969 in the United States at AT&T Bell Labs. In 1970, Boyle and Smith submitted a paper on their invention of the CCD to the Bell System Technical Journal. Their original ideas for the CCD were to create a memory device. However, with the publication of Boyle and Smith’s research in 1970, other scientists began experimenting with the technology on a range of applications. Astronomers discovered that they could produce high-resolution images of distant objects because CCDs offered a photosensitivity one hundred times greater than film.

50 years of the CCD commemorative Logo produced by Teledyne e2v to mark the anniversary.

Teledyne e2v will be marking the anniversary with the production and creation of a unique badge design, holding an event for its staff who have worked tirelessly on the development of the worlds most advanced CCD designs and a series of short publications:

Dr Miles Adcock said: “It is incredible to think how the invention of the CCD 50-years ago would lead to not only a multi-billion dollar a year imaging industry but also that it enabled the understanding of the life-sciences we have today and the discovery of distant worlds.”

Teledyne e2v’s CCD fabrication facility is critical to the success and quality of future space science missions and remains committed to being the long-term supplier of high specification and quality devices for the world’s major space agencies and scientific instruments producers.

Please follow us on LinkedIn, where we will be posting download links for some of the above materials over the coming weeks. 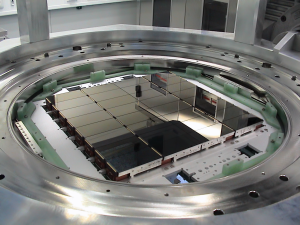 Teledyne e2v CCD44-82 Image Sensors used on the wide-field camera OmegaCam on the VLT Survey Telescope (VST) for OmegaWhite, a variability survey aimed at binary stars with orbital periods of less than 2 hours.